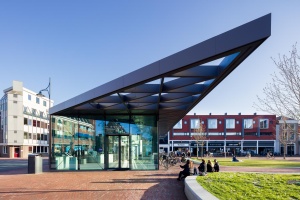 The team with VVKH Architects, Dura Vermeer and Besix has been selected for the design and build of a five-story underground parkinggarage in the historical center of Leiden. 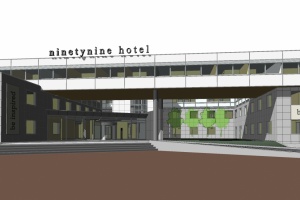 We then made the design for the transformation into a hotel with 133 rooms and various facilities, such as a restaurant, bar and lounge.

Based on the study and design, the zoning plan has been adjusted in consultation with the municipality and an interested market party has been contracted: Centro Hotels from Germany. The design was then fully tailored to Centro's wishes. A completely new, trendy hotel formula for the Netherlands will be introduced in the building; the "Ninetynine-hotel Amsterdam", specifically aimed at the younger target group. Vitamin-E has provided the interior design of the Ninetynine formula on behalf of Centro. The new hotel will be a good addition to the current offer in the municipality of Haarlemmermeer.

The demolition work was carried out in 2017, and in November 2018 the transformation of the existing office building into a hotel started. 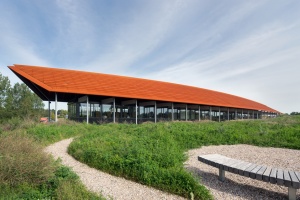 House Hilde lies on the dunes, on the tourist route between Station Castricum and dunes. The building opened in January 2015 and combines a depot with a museum function. The archaeological center is named Hilde, a woman from the fourth century AD and found in 1995 during an excavation in Castricum.

Hilde house was commissioned by the Province of North-Holland. Every Dutch province is responsible for the preservation and exhibition of archaeological finds within its borders. The old depot of North Holland in Wormer was too small, the climate was bad manageable and it was only limited accessible to visitors. The building on the Zanderij in Castricum offers plenty of space for storage and exhibiting archaeological finds and collections.

Hilde house has a floor area of 4,480 m2 and is divided into a pavilion and an underground depot. The building is designed with the surrounding landscape.  The draft refers to an old dune landscape (so called “nollen” landscape) that is much older than the current shifting sand dunes and can still be found at various places in North-Holland. In the aboveground elongated pavilion on the one side the main entrance, with desk, museum shop, and a space for temporary exhibitions, cloakroom and toilets are situated, on the other side the office staff. On the first floor is a small restaurant with terrace and auditorium. The elongated shape and the 70-meter roof of the building refer to the early medieval farms, as they have been in the area. The curved roof structure is finished with Corten steel sheeting as a reference to thatched farms. The large overhangs of the roof protect the interior from direct sunlight, which allows the use of large glass surfaces. The façade is decorated with stone from Morocco, fossil pintail squid in it, a reference to the archaeological feature of the building. This stone also comes back into the interior.

The depot is about 2,200 m2 and is divided into several archives and the centrally located exhibition space. The hilly “nollen” landscape is, as it were, pulled over the depot. By placing a meter of sand on top of this part of the building a stable climate is achieved in a passive way and only limited installations are necessary in order to maintain a constant temperature and humidity in the depot. By putting strong in design and construction on sustainability House Hilde has an average score of 8.6 on the sustainability label. In addition, the integration of buildings with the landscape certainly has a symbolic value: in the ground is the best place to preserve archaeological treasures.

In the old wharf cellars at the intersection of the Oude and Nieuwe Rijn in the center of Leiden is the café restaurant "Annie's". We designed a curved floating terrace on behalf of the owner of the restaurant. 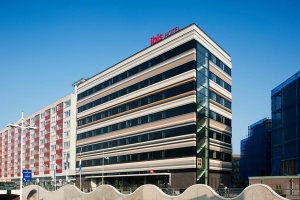 The former university building at the Stationsweg, has been renovated and expanded into a 118-room economy hotel. It is the first franchise hotel of all 870 Ibis hotels in the world and the first Ibis hotel according to the new Ibis generation formula. The new hotel is located opposite Leiden station and is clearly visible from the railway and station.

The 60s building has a completely new facade. The horizontality of the original facade has been enhanced even more in the new facade by providing the parapets of all floors with relatively narrow bands of ceramic elements, placed in varying colors. The black frames and cladding are fitted with a deep gap in relation to the ceramic elements. This makes the colorful horizontal ceramic elements iconic. The facade is continued above the roof. The high, slightly recessed eaves provides a clear termination and also shields the installations on the roof. The plinth of the building is made of a robust stone and a lot of glass. Together with the long white stately canopy of light concrete, they form the basis for the horizontally articulated facade on the one hand and an inviting entrance to the hotel on the other. The high ground floor has been made suitable for public functions such as reception, bar, lounge and dining room, also designed by VVKH. In addition to the "Ibis identifiers", the program of requirements and the wishes of the owner, the zoning, materialization, the existing height and the characteristic concrete construction were also the starting point for the interior design. 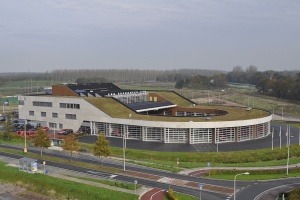 This new building had become a recognisable beacon on the edge of the city of Assen. The building accommodates several emergency services such as a firestation, the Area Health Authority and the Safety Region Drenthe. Together with the Koopmans Bouwgroep, VVKH won the design & build competition. The new building is compact, sturdy looking and radiates preparedness for an emergency. All functions have been placed under a single roof, organised around a central atrium. From the atrium there’s a view on the court yard where fireman are practicing. The firetrucks are stationed around the court yard, ready to tear out. Offices are concentrated on the higher floors overlooking the highway A28. The building has a very high sustainability-rating (Dutch GPR-score 8,0). 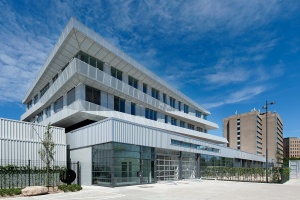 A former Mercedes showroom is rebuild to become the regional ambulance station. From here thirteen ambulances are ready to tear out in an emergency. On top of the existing showroom an new building with offices and a hightech trainingcenter is oriented at the a busy railwayline. The new part is a sturdy building with overhanging balconies which provides shade in summer and window cleaning. In the front facade, at the Vondellaan, a small ambulance museum is created. 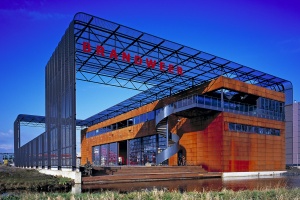 Just south of Berkel & Rodenrijs a new fire station has been built to service the suburbs build between Rotterdam and The Hague. Because of the growing number of inhabitants in this region, a future extension is already taken into account in the design. The total plot is covered with a steel mesh in which all future extensions will fit. The façade is covered with corten steel plating wich create the desired sturdy look. 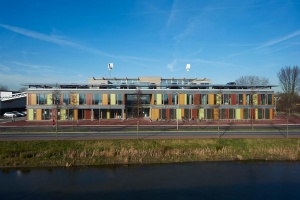 This colourfull, functional and energysaving design fully provides in the requirements and ambitions of the Leiderdorp municipality. In 2008 the municipality decided to build a new town hall and was tendered as a design & build contract. Together wit Dura Vermeer Vastgoed, VVKH won the competition. They chose a two-storey building with an atrium and parking on the roof. The atrium forms a vivid space for employees and visitors. This is also where the public counters are situated.
The new town hall is a very sustainable building. In the design we took the whole lifecycle in analyses. The result is very comfortable spaces, environment friendly materials and extremely low energy use. Using renewable energy, this building is CO2 neutral.