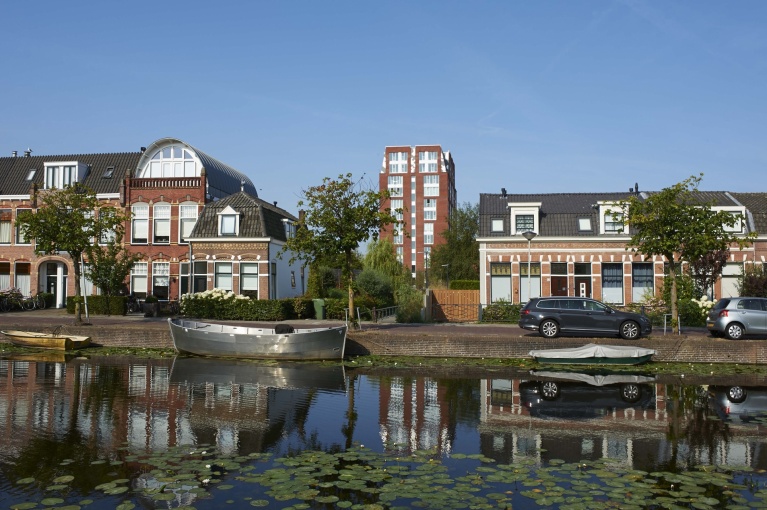 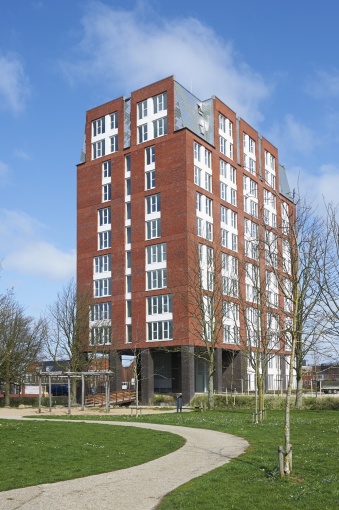 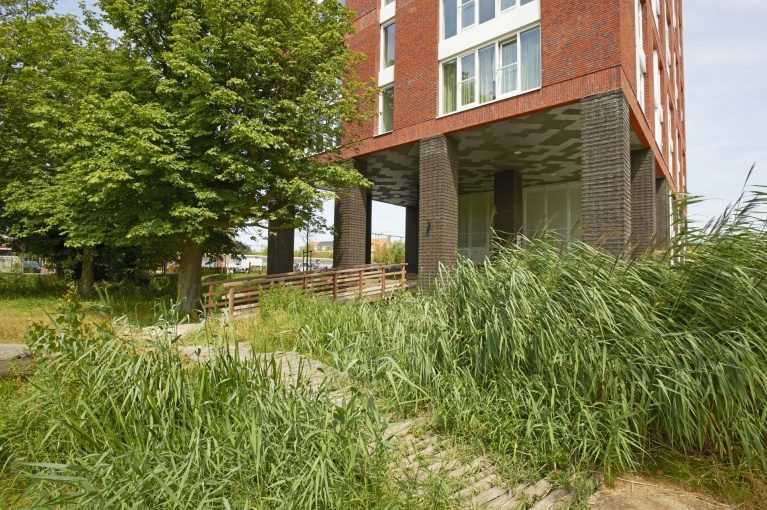 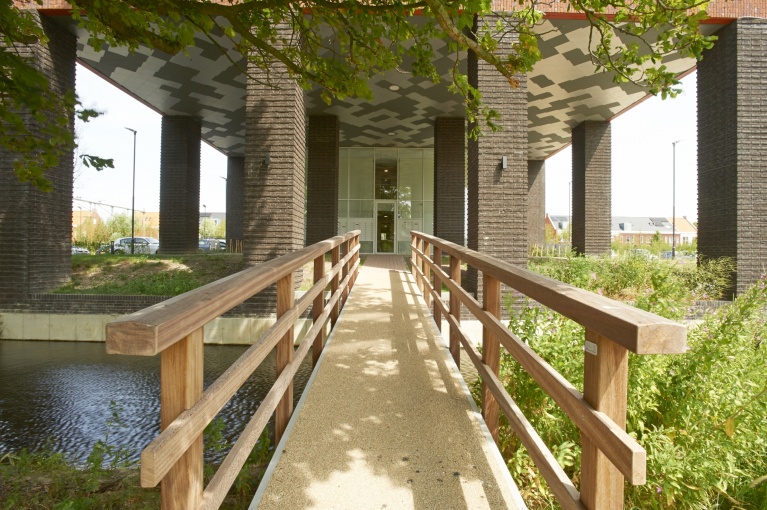 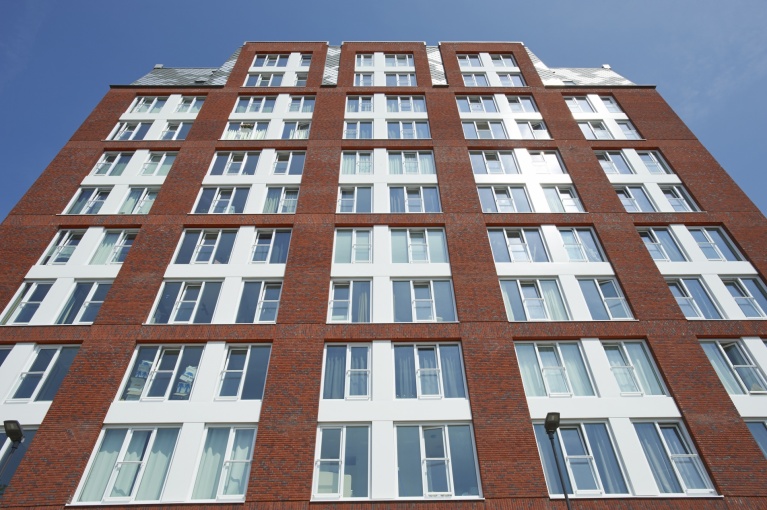 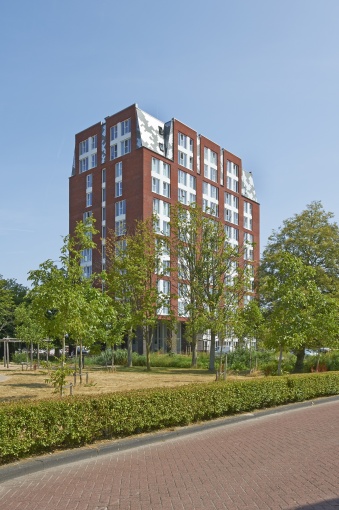 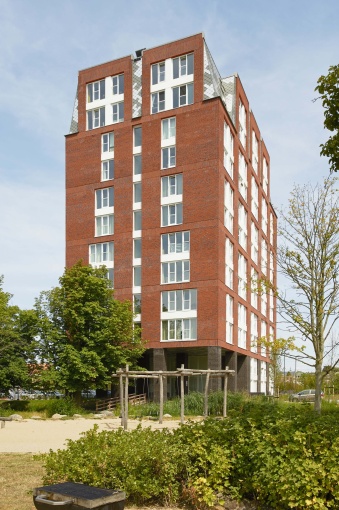 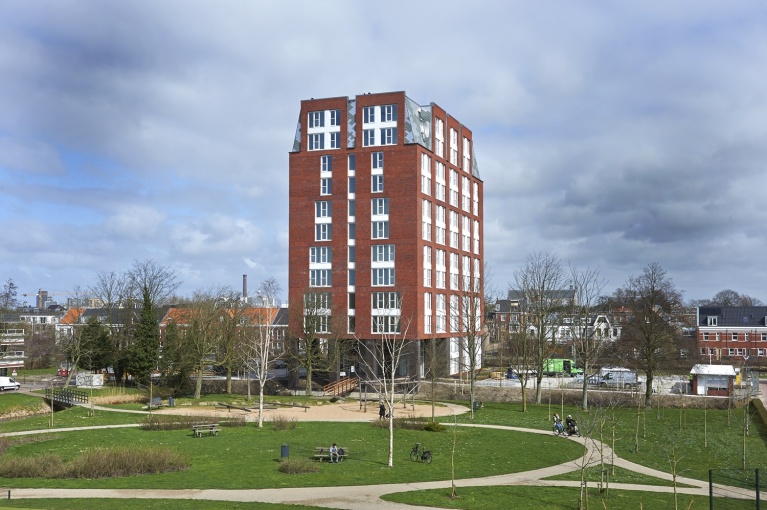 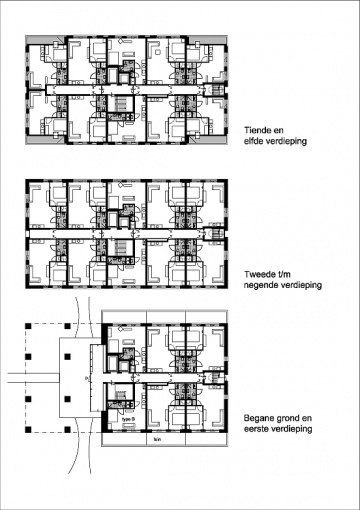 On a piece of wasteland in Leiden between the Lucebert Street and Toussaintkade an apartment building, ‘the Verleyding’ will rise this year. Construction started in March. In the building are 112 rental apartments for young professionals between 18 and 35 years. The properties are suitable for 1- or 2-person households, and have a surface of approximately 30 m2 (one-room apartment) and 45 m2 (two-room apartment).

The project is being developed and built by ten Brinke respectively Real Estate and ten Brinke Bouw. After realization the building owner will be SHWJ, Leiden. The housing design is tailored to the needs of SHWJ.

The building is 12 floors high and will become a landmark in Leiden. The area is bounded by the railway, a pond and a small park. On the park side the building stands on columns. Under the underpass, the entrance and lift are located. Together with the corridor access therefore an efficient plan has been realized, with 10 dwellings per floor. The upper apartments have stunning views over the city. The view can fully be enjoyed through the large windows. The ground level apartments have their own garden. Residents can cross a bridge over water to the park. Parking takes place on private property. The main body is constructed in a rhythm of frameworks of orange brick. The large frameworks ensure that the building looks less massive and joins well in the neighbourhood. The roof shape refers to the adjacent housing, it is finished with aluminium losagnes.

Home and Living Mall Ekkersrijt is located on the north of Eindhoven, directly at the highway A50. In 2013 the existing shopping mall (21.000 sq.mtrs) has been extensively renovated and expanded with 24.000 sqr.mtrs.

The existing building was outdated and made up of separate buildings, with closed unattractive facades and entrances, shop windows only facing the courtyard. Experience and length of stay have been central themes to the renovation and expansion. The new complex has been given a contemporary, modern feel. Old, loose components and constructions are forged into a recognizable, homogeneous unit, which is easily visible from the public road. In addition, a pleasant living environment has been created for visitors. The original stores remained open during this major redevelopment. With intensive consultation and coordination between designer, consultants, tenants and builder the inconvenience during the construction has been limited to a minimum. With this transformation the center has been made future-proof.

Existing shops have been given new facades to meet with the requirements of present times and to become one with the extension. Besides facades also the roof has been thoroughly upgraded and installations (among others sprinkler system) have been replaced, modernized. Signing is carefully incorporated and nowhere predominant.

The new building has a distinctive façade of metal with a specifically, laser cut pattern. Recessed into the façade are the neon signs and the ramps to the parking deck. The movements of the cars on the ramps provides extra dynamism in a natural way.

On the former courtyard a freestanding oval new shop building is made. This building forms the heart of the new home and living mall and is, due to its special design, an icon to the highway and nearby. From the parking deck visitors reach the heart through walkways and they go with elevators and escalators to the open and indoor malls on the lower levels of the complex. Shops on the upper floors thereby have the same run as on the ground floor. Because of the oval building shopping at ground level has a pleasant scale with shops on both sides.

The Plantsoen in Leiden is well known for the historical appearance of both the city park (1836) and the houses of the last quarter of the 19th century. The park was originally landscaped on the edge of the city in the place of an old defense belt. At the entrance of the park at the east side the monumental building Plantsoen 1 – 3 is redeveloped in a complex with 6 apartments. The apartments of about 150 m² are provided with all luxury and comfort, such as a private indoor garage, spacious roof terraces and an elevator, while retaining the historical look and value of the building. Redevelopment also applies to sustainability; obtaining Energy label A. Exterior facades, window frames and roof are additionally insulated. The houses are underfloor heated and solar panels are provided on the roof.

The municipal monument at Plantsoen 1 – 3 is divided over three floors and a basement.  The property at number 1 was originally a fully detached house, number 3 was part of a block of 3 houses. Both buildings date from 1875 and were connected in 1957 and converted into one large nursing home. In this function change, the original qualities have largely been lost. The round expansion at number 1 dates from 1993.

In the new layout with 6 apartment, the monuments are restored to their former glory by restoration contractor Burgy from Leiden. The façade of the intermediate building is renewed and aligned with the monuments. The existing façade of the round building is finished with a bronze wall cladding, a ‘veil‘ with a leaf motif. This pattern is inspired by the leaf motifs and decorations of the 19th century, which can still be found in various places along the Plantsoen. The round with ‘veil’ becomes a special recognition point in the inner city.

Each apartment has both rooms in the monumental area as well as in the newer parts. The interior of the monumental buildings is provided with appropriate details to bring back the historical character as much as possible. This specific part is provided by Verlaan & Bouwstra architects from Vianen.

On the inside buyers have a lot of freedom of choice; they can choose for an even richer historical finish with wall tension, panelling and en-suite layout or a tight, modern finish and layout; both are possible. Each apartment is unique, has its own layout and its own character. Only the view is the same for all apartments; they all look out over the beautiful monumental city park the Plantsoen at the town canal.

The redevelopment was completed in July 2018.

On the Boerhaave Campus, part of the Bio Science park in Leiden, the historical anatomy-building has been transformed into housing for Phd-students and researchers of the Leiden University. The new apartments are characterized by their high ceilings and old constructions. A small mezzanine is created to function as a bedroom. Right beside the existing building a new appartmentbuilding is erected, designed by Van Gameren of Mecanoo Architects. The total complex contains 166 apartments and is the first step in the complete transformation of the Boerhaave Campus.